I’ve been thinking about writing this article for a while, wondering if I was the only one thinking this way. But I’ve just had enough, I’ve found the straw that broke the camel! I’m tired of all the bullsh*t people post on Facebook! Every time I scroll down my Facebook home I find stuff that make me go ‘WTF?’ o.O or ‘OMG’ >.<

Don’t get me wrong, I like Facebook and I think it’s really useful to keep in touch with family and friends that are abroad and it’s a nice way to share pictures and memories with your friends. I find the games entertaining most of the time though a bit time-consuming. My problem is not even with the people I’m friends with. My problem is with the pages. The pages, the pictures and the likes. Particularly the pages sharing pictures asking, no begging, for likes. If you look closely at them, you’ll most probably find they are dumb…and a bit pathetic too.

Let’s see one of the dumbest pics I found the other day. 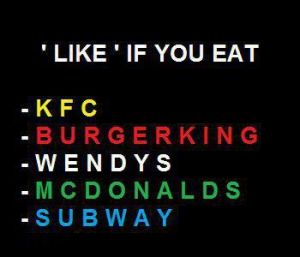 Now I don’t know about you but after seeing so many dumb pictures requesting   ‘likes’ this one struck me. It did not incite me to like, it made me wanna comment something like ‘I don’t. I’m vegetarian. What’s the point of this? Excluding the vegetarians? Make us feel excluded?’

But no. Since I know these restaurants have vegetarian meals. Yet, what’s the point? I don’t get it at all. If you do then explain to me please.

But I just found something just as dumb or maybe even more. See for yourselves:

Hey, I don’t even know the person who posted this since it was on a page. It’s probably the admin and he or she probably lives somewhere far from Mauritius. And I don’t think that I’ll get to see that person drink the freaking glass of ketchup. Unless they post a video..but that’s improbable, right?

Anyway the photo did not get enough likes. But I wonder what those people who liked thought would happen… If they badly wanted to see this happen they just had to go play ‘truth or dare’ in real life. Not on Facebook.

I think people who post stuff just to incite the mass to ‘like’ are pretty much pathetic. They could at least be more..original and creative, right? I mean I’m not the only one to think that ‘like if you miss blabla‘, ‘like if you remember blablabla‘ or ‘your childhood was awesome if you remember tadada‘ are getting old, clumsy and uninteresting, huh?

There’s worse of course… There’re the posts that play on your conscience. They ‘bully’ you as one of my friends put it. Let me explain by giving you three common examples that are often posted on pictures:

* ‘Like if you love your mom. Scroll down if you hate her.’

Man, I love my mom, ok? Liking or ignoring your stupid picture won’t ever change my feeling for my mommy! People don’t be weak! Don’t fall for the trap! We all know you love your moms 🙂 And if there are people who don’t we’ll never know…

Now considering it’s about racism, all the self-conscious people will like the picture. Maybe those who like are racist, after all who will know? I don’t like these pictures but I’m totally against racism! I don’t think liking a picture contributes in any way. Besides, most of these pictures portray black and white kids holding hands or black babies. That’s fine, I guess. But they are other races and in no way is the picture promoting ‘no racism’ against them. I know the subject is touchy so I won’t go any further. Excuse me if I expressed myself in a wrong way

Then we have God. I have a quick answer to this one: if I’m atheist then I don’t believe in God nor in Satan. Therefore the picture does not apply. Hehe. I’m just saying though. All the people believing in God may rush to like this pic but man, it does not prove anything and I don’t think God would appreciate using His name to collect likes. Nope.

Well know I want to show you what made me ‘explode’. What was the straw that broke my camel. It’s a picture…and then there was also all the comments. It all disgusted me and angered me so much…

Tell me what exactly is ‘gay’ about this guy? Go on tell me. Is it his haircut? Or is it the fact that he’s implying he prefers smaller boobs? Or is it both? Or something else? I mean I don’t find this gay at all. I think it’s really cute actually. And what’s wrong if you don’t like huge boobs? Does that make you ‘gay’? He still likes boobs from what I understand…that cannot make him gay, right?

Now I did find the picture stupid and immature in a way but the comments were revolting! Let me quote: ” How can he see through those lines!? he looks like one high mother f***er!” and “whoa hair needs cutting and needs proper clothes and yeh you could say he’s gay this whole thing is f**ked up.”. The comments ranged from “mega gay” to ” LOOOL its a guy? So fucking gay” and “Gaysian even”.

I’m sorry but I do not tolerate homophobia. I tolerate it even less when racism mingles with it.

And I like his haircut. I think it’s original, cute and I’d love to play with his hair *-*

Last thing is I want to clear things up. I wanted to explain that people cannot look ‘gay’. I wanted to write all about it but it would probably take too long… So, I’ve found this video and I think it very clearly explains what I wanted to explain and it really shows the reality and the truth about ‘looking gay’.

I had a wild thought…